From ARMS Institute, the ARMS Wiki
Jump to navigation Jump to search
The Airess
Ribbon Girl 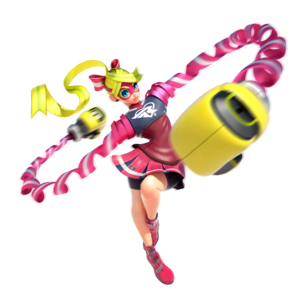 Ribbon Girl is a playable fighter in ARMS. She is a well-renowned pop singer, despite her young age.

Ribbon Girl appears mostly human except for her spiraled irises and her ribbon-like hair and ARMS. She has blue eyes with blue eyelashes, and blonde hair with green highlights tied up in a high ponytail. Despite her normal hairstyle, with her hair up, only showing one ribbon in her hair, official art of her with her hair down confirms her hair is made of of multiple ribbons. She wears a pink bow in her hair, a pink mask, blue earrings, and pink and red clothes that resemble a cheerleader's uniform along with black shorts and red sneaker heels. Other outfits she wears includes a long-sleeved white shirt with a high collar and a long red-brown skirt with a silver belt buckle, a feminine outfit modeled after Santa's, and dark grey pajamas consisting of a short grey dress, and she is also seen with her hair down.

Ribbon Girl is both a famous ARMS fighter and a famous pop star who belongs to Ribbonics Records, and likes singing for her fans.

Ribbon Girl's style is very versatile. Her superior air ability can be used for extreme offense or extreme defense. She can use her many jumps to evade incoming punches with relative ease, or she can use them to get in her opponent's face and confuse them, leaving them wondering what she will do next.

Depending on the chosen stage, Ribbon Girl can take advantage of differences in height within a stage better than almost any other character, almost ignoring them completely. Her low Girth stat means that one has to have great precision when aiming punches, but her quickness and agility allows her to dance circles around her opponent. Consequently, she favours faster, smaller ARMS over larger, more cumbersome tools. Her game consists mostly of moving and evading as much as possible, finding small holes in her opponents defense and punishing relentlessly, chipping away at their health bit by bit.

ARMS with fast extension times and large reliable boxes work well with Ribbon Girl allowing her to get in free hits, once the opponents miss their own punches trying to catch her. These are some good choices

Ribbon Girl appears in Super Smash Bros. Ultimate as a costume worn by Mii Fighters, specifically the Mii Brawler, complete with her signature Sparky ARMS. She also appears as a Spirit that can be either summoned by using the spirit cores of the Elite Beat Divas and ChuChu or obtained by winning her Spirit Battle in Min Min's DLC Spirits board.

Ribbon Girl also cameos in Min Min's reveal trailer as well as her Final Smash, ARMS Rush, attacking players alongside other characters from ARMS. She also appears on an electronic billboard in the background of Spring Stadium. 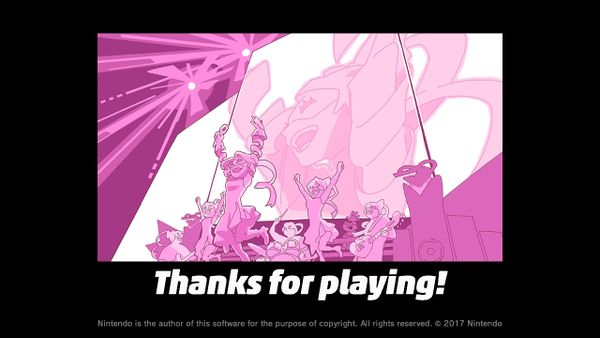