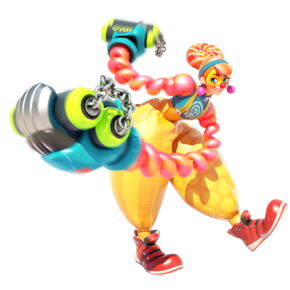 Lola Pop is a playable fighter in ARMS, released in the Version 3.0.0 update on 2017-09-13.[1] Her fighting style is based on her ability to inflate herself like a balloon.

Lola Pop appears mostly human except for her spiraled irises, her candy-like ARMS and orange and red lollipop-style hair. She wears yellow overalls with a stripe pattern on the left leg and a polka dot pattern on the right leg, a clown nose, a blue headband, purple ball-shaped earrings, a yellow mask that covers the top half of her face, a blue athletic shirt with her logo on it, and red sneakers shaped like oversized clown shoes. While she is inflated, Lola is as round as a ball, her legs enveloped so that only her shoes are exposed.

Lola Pop is able to inflate her body while shielding, which appears to provide added defense[2] and allow her to slowly move around the stage while blocking. While inflated, she can immediately cancel into a fast dash or high jump. She can also inflate in the air while holding dash, causing her to shield herself for a short moment before dropping quickly and bouncing on the ground. She can chain these bounces to change position while retaining charge. This also helps her keep a defensive position while moving, because Lola cannot move from side to side when guarding normally.

The mobility options when shielding give Lola Pop unique ways of pressuring, retreating, and mixing up opponents to create openings. Her shield-dashes and bounces provide a wide variety of options, that though each individually punishable, can answer any choice from the opponents.

She is especially dangerous at the mid-range where her massive option pool means she can threaten in ways completely unique to her. Unpredictability is key to success with the Candy Clown.

She works well with ARMS that keep opponents at a distance, and on the back foot with as few options as possible. There, she can almost overwhelm opponents with the sheer volume of possible moves she can make, all of which require different reads and punishes. Some examples are:

Lola Pop cameos on an electronic billboard in the background of Spring Stadium. 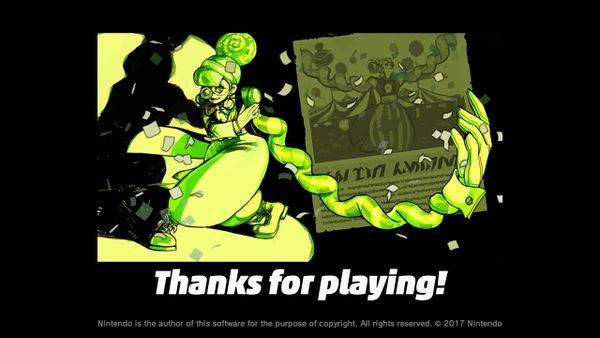