From ARMS Institute, the ARMS Wiki
Jump to navigation Jump to search
The Commish
Max Brass 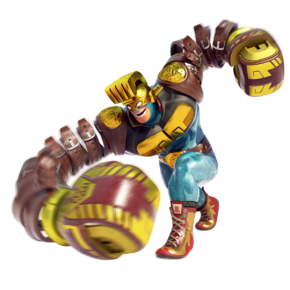 Max Brass has a large, muscular build. His ARMS are made of belts, in reference to his long-standing championship, and he also boasts a championship belt around his waist, as well as on both of his shoulders. He wears a tight blue and gold bodysuit, a golden mask with a model of a fist atop it, armor with brass fist ornaments, and red and gold boots. His eyes appear to be completely white, though whether this is how his eyes naturally are or a result of the mask is unknown.

Upon fully charging his punches or successfully performing a throw, Max Brass can temporarily increase the size of his upper body, during which his punches will be permanently charged and he will resist being knocked down when punched as if he were a heavyweight; resisted punches will have their damage reduced by 50%. While pumped up, his super armor is constantly active unlike other heavyweights. While in the pumping up animation, he will parry incoming attacks. This effect lasts five seconds or until Max Brass is knocked down.

He also shares Spring Man's ability to deflect incoming punches when releasing incomplete charges. When his health reaches below 25%, Max Brass will automatically be "pumped up", providing him with permanently charged ARMS and super armor. He will automatically perform the pumped up animation once his HP drops below 25% and will perform it every time he recovers from being knocked down.

Max Brass is the most overbearing character especially buffed up, with super armour, massive ARM girth, high grab damage, long charged time and a deflect ring. Brass is perhaps the best in the game at turning neutral situations to his advantage, and keeping it that way, with his suffocating wakeup pressure.

Once he's able to get buffed, his comeback ability is unparalleled as it brings together many of the best tools to pressure up close, or poke at range, in addition to gaining extra mobility.

Max Brass works well with most ARMS, especially ARMS that are good up close and can cause knockdowns. From there he can pressure his opponent better than anyone in this game, stuffing out counterattacks, while being mobile enough to track movement and hit with insane damage. Some examples are:

Max Brass is the final boss of Grand Prix mode. When fought at Level 4 or higher, he is possessed by Hedlok for another battle after the player defeats him.[2] If playing 2-player Grand Prix, Max Brass will fight alongside a random playable fighter. As of the Version 5.0.0 update, if the Grand Prix is attempted at Level 6 or higher, Dr. Coyle will be fought instead of Max Brass as the final boss.

Max Brass appears as a Spirit that can be obtained by winning the Spirit Battle in Min Min's DLC Spirits board. He also cameos on an electronic billboard in the background of Spring Stadium. 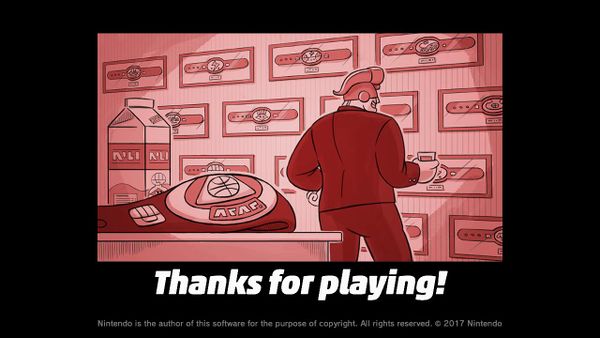