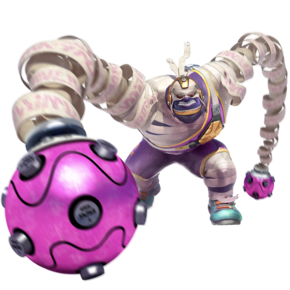 Master Mummy is a playable fighter in ARMS. He is a mummy that's been reanimated by Dr. Coyle, searching for his long-lost family.

Master Mummy's tall, bulky body is mostly covered in strips of linen, which also make up his ARMS. He has purple skin as well as purple lips and red eyes with spiraled irises. He wears a purple, one-shoulder wrestling singlet and cyan sneakers. Master Mummy also wears a gold plated helmet with screws on the sides and top, and has strips of linen coming out of the back of his head resembling a ponytail. Master Mummy's ARMS mask features a golden metallic harness bolted onto his head, with more linen and straps to cover the upper face.

Master Mummy's motivation for entering the Grand Prix is to reunite with his family. He is known to have a wife and a son.

Dr. Coyle states in her notes that she performed experiments on Master Mummy that ultimately lead to his reanimation, as well as his ability to use the ARMS ability. However, he suffered total memory loss after the process.

When blocking, Master Mummy will heal in 10 health increments; the rate at which he heals will speed up the longer block is held. In addition, he will have super armor and not flinch from attacks that don't force knockdown while jumping, dashing, or punching; he also gains 50% damage reduction when a punch is resisted. Super armor will decrease the initial damage of ARMS as well as resulting explosions from the Explosion attribute, however will not resist additional hits from mutli-hit ARMS (this applies to other characters with super armor as well).

The Grim Creeper lives up to his name, as his devastating grab, super armour and massive ARM girth allow him to slowly push and bully opponents into a corner. When you get your opponents into a corner, you can limit their escape options, by shrugging off normal punches while Mummy’s own offense becomes unreactable.

If the situation calls for it, you can also sit back and heal to get down-to-the-wire timeout wins as well as bait unsafe approaches and punish.

ARMS that limit and control the opponent's movement or shut down the opponent's offense work well with Master Mummy. They conceal his own low mobility, and force opponents to play at his pace. Some examples are:

Master Mummy appears as a Spirit that can be obtained by winning his Spirit Battle in Min Min's DLC Spirits board. He also cameos in Min Min's reveal trailer as well as during her Final Smash, ARMS Rush, attacking players alongside other characters from ARMS. He also appears on an electronic billboard in the background of Spring Stadium. 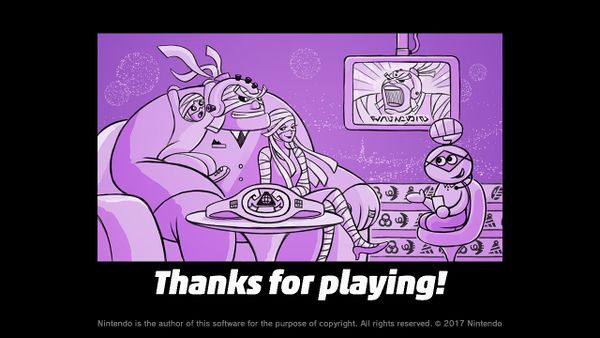