From ARMS Institute, the ARMS Wiki
Jump to navigation Jump to search
The Scrapyard Scrapper
Mechanica 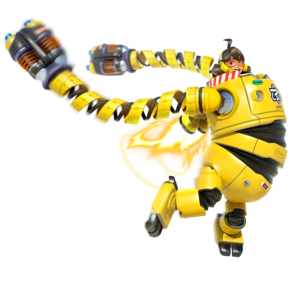 Mechanica is a playable fighter in ARMS. She has never gained the extendable ARMS ability naturally, so she uses a powered suit to compete.

Mechanica is the only fighter who appears fully human. Her eyes lack the spiraled irises of the other human-like fighters, and she has normal human arms. She has lavender-pink eyes, and brown shoulder-length hair with an ahoge. She pilots a mech that has extendable ARMS made of coiled metal plates and electrical cables, and she wears a yellow and blue form-fitting bodysuit, yellow goggles, and yellow fingerless gloves over longer fingerless blue gloves. Other outfits she wear include an alternative, long-sleeved version of her suit, a short-sleeved yellow and orange striped dress with a collar with brown sandals revealing her orange painted nails, a blue-grey tank top over a yellow shirt under an orange jumpsuit to which the top is tied around her torso, the same outfit, but with orange pants, and with her hair tied into a ponytail with an orange hairband.

Mechanica’s family uses a scrapyard as their workshop. In her day-to-day life, Mechanica works alongside other employees and helps her dad with his work. When she was younger, she found a tiny TV at the local scrapyard; she used it to watch ARMS matches. There was a time when she went to watch the Grand Prix with her dad. They even managed to snap a photo with Max Brass. That experience cemented her status as a lifelong ARMS fan. Eventually, the whole workshop became covered in TVs so everyone could watch ARMS matches while they worked.

Mechanica watched Max Brass dominate the ARMS League throughout her childhood. During that time, she also taught herself the inner workings of machinery by disassembling equipment that was unknown to her. In time, her family’s scrapyard also became her work station. As a fan of Ribbon Girl, Mechanica decorates her workshop with numerous stickers and drawings of the pop star. She created plans for her fighting suit with extendable arms at the scrapyard. The suit was the only way for her to contend with other ARMS fighters, as she has never gotten the ARMS ability naturally.

With the skills and knowledge she gained from tinkering with machines, she built her mech suit at her workshop using old spare parts and other junk she collected there. It is assumed that she had not just experience, but also talent, as she built something so complex at such a young age. Though Biff later questions the legality of her suit in the Grand Prix, it is a fact that she is allowed to enter. She entered the tournament at the age of 15. She is something of a local celebrity in her home scrapyard due to her accomplishments.

Her hefty suit puts her at a weight of 545 kg, but she has a decent amount of mobility through the inclusion of thrusters on her suit. Her jetpack allows her to hover and dash in midair, even as a heavyweight fighter. Her workshop was remodeled into the stadium known as the Scrapyard for the tournament. Her dad and his employees await Mechanica’s debut at her home stage.

Mechanica is a heavyweight similar to Master Mummy, meaning she can super armor through attacks that would put other fighters in hitstun while in the air, dashing, or punching; she also gains 50% damage reduction when a punch is resisted. However, she is designed to be somewhat more agile, having the ability to hover in midair by holding the jump button, which also allows her to attack from a high vantage point and charges her ARMS. She also has the option to extend her dashes by holding the dash button, gliding across the floor with charged ARMS.

While Mechanica hovers in the air, she is notable more susceptible to status effects such as Electric and Ice, as she won't be knocked down when stuck by these effects.

The Scrapyard Genius' mech suit can be effective with a similar dominating, cornering playstyle as Master Mummy. However her ability to be mobile while throwing charged punches allows her to be less stilted in neutral, charge Rush quickly and suffocate the opponent with a continuous barrage of hits.

As Mechanica, it’s important to learn to switch between poking at range, and cornering with armor effectively. While her ground and air hovers grant armor, it is important to not be overly committed to hovering; this is due not only to the slow speed of her hover, but also due to how hover is a fixed duration each dash, allowing opponents to predict and connect punches where her hover will end.

ARMS that work well with her allow her to take advantage of her playstyle changing between a poking style and a bully style quickly. Some examples might be:

Although Mechanica did not appear initially, her spirit was added on June 29, 2020, released alongside Min Min, obtainable by winning her Spirit Battle on Min Min's DLC Spirit Board or purchasing it on the Vault Shop. Her spirit is represented by Wendy, with her Junior Clown Car being referencing the mech Mechanica rides. She also cameos in Min Min's reveal trailer as well as during her Final Smash, ARMS Rush, attacking players alongside other characters from ARMS. She also appears on an electronic billboard in the background of Spring Stadium. 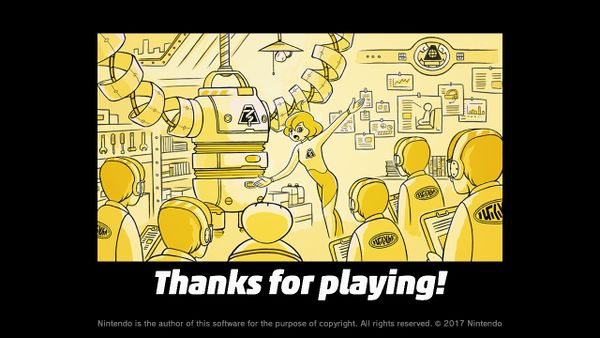