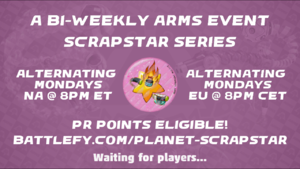 The logo for the Scrapstar Series.

The Scrapstar Series was an online biweekly ARMS tournament series organized and streamed by Mileve. The series started in February 2019 and ran events until November 2020. It was one of the few biweekly events to be consistently streamed each week it was ran. Each of the tournaments counted toward the Power Ranking of their respective regions.

Initially, the Scrapstar Series ran weekly double elimination brackets for North American and European players. Over time, this changed so that the series ran biweekly with both brackets still being the same day. For a short time there were also events held for players in South and Central America as well, but these were shortly lived.

Up until the 31st event, Scrapstar brackets were ran on Challonge which required players to utilize Mileve's Discord server to communicate with their opponents as Challonge lacks player-to-player chat functions. For the 31st event onward, Battlefy was used for the brackets instead. Battlefy does have player-to-player chat functions if players desire to use it, but players also have the option to still use Discord communications if it works better for them. This change occurred because the tournament's organizer, Mileve, was offered benefits and advertising by Battlefy which Challonge did not provide.

Scrapstar Series events typically run tournaments with the "Backroom" stage list, but on occasion other stages have been thrown into the mix. These other stages include [NAME REDACTED], Sky Arena, and Ramen Bowl.