From ARMS Institute, the ARMS Wiki
Jump to navigation Jump to search
The "Man" of Mystery
Helix 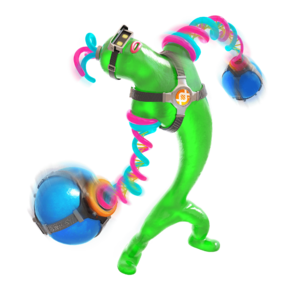 Helix is a playable fighter in ARMS created by scientists at the ARMS Laboratory. His gameplay style revolves around evading enemy attacks.

Helix is a translucent humanoid blob made of, by default, what appears to be a green, gelatinous goo. His ARMS resemble models of DNA molecules, sporting a neon pink and blue sugar-phosphate backbone and yellow nucleotides. Out of the top of his head sprout hair-like protrusions that match the sugar-phosphate backbones of its DNA arms. He has, by default, a pink lipped mouth with a row of upper teeth. Helix does not have eyes, instead wearing a rectangular metal “mask”, which appears to have an array of small lights with two eye-like illuminated spots, along with a small metal visor. He wears a harness that covers its chest and back, which has Helix’s logo on it in an orange circle, and has the ARMS logo on the straps.

Helix was created by scientists in ARMS Laboratories with Dr. Coyle being the head of the project, and escaped his cultivation tube prematurely. Dr. Coyle considers him to be a disappointment, stating that she thought he'd be more impressive. He is not considered to possess the true ARMS ability and is therefore known as a "second generation" competitor in the ARMS League. Despite that, Helix's presence in the ARMS League allowed ARMS Labs to obtain combat data that they would use to create Springtron.

Helix's intended playstyle is designed around his ability to manipulate his height and outmaneuver opponents. When dashing, Helix will sink into the ground, decreasing his height. If a dash is correctly timed, Helix will avoid harm from incoming attacks. Conversely, holding the jump button stretches Helix, offering him the ability to attack from above for extended periods of time. In this extended state, Helix will become thinner and can move his torso freely, offering further defensive options, as well as having his ARMS permanently charged during this state.

While extended, Helix's ARMS will still act as if they were used on the ground, however when receiving attacks, he will act as if he were in the air, so debilitating status effects like Electric and Ice will knock him down instead of leaving him open.

Helix is one of the most unique fighters in this game. Despite his low mobility, his tower mode and puddle forms can make him hard to pin down.

He can constantly poke while dodging in his perma-charged tower mode, and he can duck under most ARMS while in his puddle form. Use his unique evasive abilities to pressure constantly with normal punches, while remaining slippery and hard to hit.

Glove ARMS and ARMS that quickly knock down opponents work very well with Helix. By using a constant barrage of reliable, safe punches done in a rhythm, it is extremely hard for an opponent to jump or dash through without excellent timing and Shield-Dashes

Helix appears as a Spirit that can be obtained by winning the Spirit Battle in Min Min's DLC Spirits board. He also cameos in Min Min's reveal trailer as well as on an electronic billboard in the background of Spring Stadium. 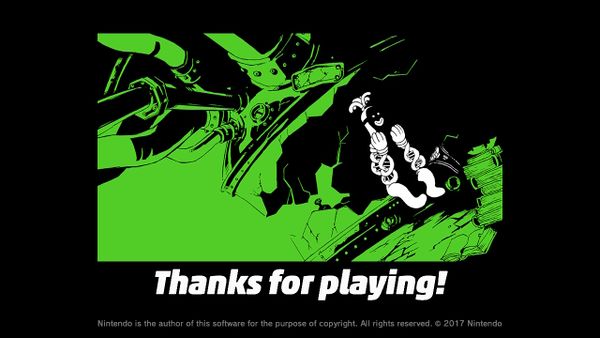