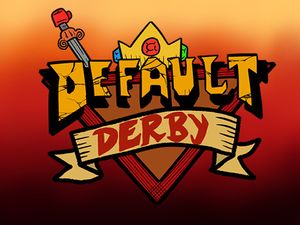 The logo for Default Derby.

Default Derby is an online weekly ARMS tournament series organized by Frosty and LOSER and created by Era. The series began in early 2019 and is still having new events today. The series stands as one of the, if not the only, default ARMS only events that still continues to have new tournaments. On May 13th, 2021 after the 46th event, Era transferred ownership of the event to Frosty and LOSER citing that work and school were keeping her busy.[1]

Similar to most biweekly/weekly events, Default Derby runs double elimination brackets, though if there are less than eight entrants then a round robin bracket is held. Players utilize the Ohio ARMS Discord server to communicate with their opponents as the brackets are ran on Challonge, a site that lacks player-to-player chat functions. The event initially started as a biweekly, though in early October of 2020 it was switched to be weekly.

As stated in the event series' name, Default Derby only allows the use of default ARMS. Default ARMS are the selection of ARMS that each fighter begins the game with. For example, if one were to use Helix, their ARMS have to be set to the Blorb, Ice Dragon, and Guardian. This ARM restriction was chosen for the series because Era saw the lack of any defaults only events as an opportunity to create one of her own.

Default Derby utilizes the "Backroom" stage list which consists of the stages that are traditionally considered legal. These stages include Sparring Ring, Mausoleum, DNA Lab, Buster Beach, Temple Grounds, Scrapyard, and Via Dolce.