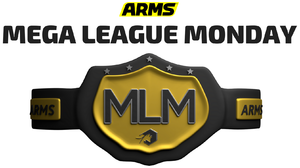 The logo for Mega League Monday.

Mega League Monday was a weekly ARMS tournament series organized and streamed by Schkrimps. The series ran from late 2017 to early 2019 consistently, but laid dormant for most of 2019 and 2020. In late 2020, Schkrimps announced the series would return in 2021, holding a single event that December and fulfilling his promise the following month. The series is widely known as one of the most successful weekly ARMS tournaments.

Mega League Monday, unlike most other tournaments at the time, did not run a traditional double elimination bracket. Instead, participants were put into four player round robin pools in which the top two players of each pool moved on to a single elimination bracket. The group stage pools were unseeded which allowed for players of all skill levels to play more sets compared to if the tournament was double elimination. Players utilized Schkrimps' Discord server to communicate with their opponents as the bracket was ran on Challonge, a site that lacks player-to-player chat functions.

The bracket format was met with mixed reception from players as while it allowed newer players a chance to play more sets, it could also inconvenience higher level players who are put into a pool with other highly skilled players. The stage procedure was also met with some criticism as stages were chosen at random (from a legal stage list) instead of using stage striking.

Despite these criticisms, Mega League Monday managed to encourage players of all skill levels and locations to join. In its peak, the weekly managed to garner 50+ entrants.