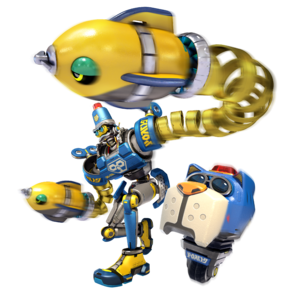 Byte & Barq are playable fighters in ARMS. They are a robotic duo that fight alongside each other. Byte is a tall police robot, while Barq is a cubic robot dog with a wheel for movement. Byte is controlled by the player, and Barq is controlled by an AI.

Byte is a humanoid robot whose extendable ARMS resemble clockwork mainsprings. He has large wind-up keys on his shoulders. Though he does not seem to be wearing clothes, his design is reminiscent of a police uniform, complete with a badge on his "hat."

Byte's robotic canine partner Barq is shaped like a dog's head mounted on a single wheel. He wears sunglasses and, like Byte, has a beacon light on top of his head. These lights will flash when Byte & Barq's arms are charged.

Byte and Barq are a pair of beach patrol robots for Buster Beach. According to the Gallery on ARMS Lab Confidential 13's text, pairs would normally not be allowed to compete in the Grand Prix, but they were able to participate because, during the inspection, they showed up in their combined form with Barq pretending to be Byte's head. Even among "second generation" fighters, Byte and Barq were unique, and even after they were found out to be a pair they were still able to compete due to their popularity.

The intended playstyle of Byte & Barq heavily revolves around negating Byte's mediocre stats by strategically utilizing Barq. Byte is somewhat slow, is considerably tall, and has an unorthodox dash, leaving him somewhat vulnerable on his own. Barq is AI controlled and can attack and move, enabling him to extend combos or take hits for Byte. Using a Rush will instantly revive Barq and merge him with Byte, removing the former from the playing field but instantly reviving him if he is knocked out. In addition, Byte's air game is greatly bolstered by Barq, who can be jumped on through several different approaches and behaves like a spring, Byte's ARMS will be charged when launched up. An aura that parries oncoming attacks which surround Barq when he is jumped on. Barq can be knocked out for five seconds at a time, and takes some time to return to Byte on occasion.

By default, Barq will stay forward and to the right of Byte, though, between Barq's relatively slow movement speed and the potential for them to be separated (i.e. if Byte gets thrown), this is sometimes difficult to maintain. If Barq cannot reach his default position of forward and to the right due to an obstruction, his default position is moved to the same position but on Byte's left, and the converse is true as well. In addition, when Byte guards, or when an opponent fighter targeting Byte uses their Rush, Barq will move to directly in front of Byte.

Barq's ARM resembles the Toaster. It does 30 damage uncharged, and while charged it does 60 and inflicts Fire damage. Barq's punches are based on a timer. This timer will only be active if Byte is not blocking, dashing, or jumping. Barq will throw a punch every five seconds if Byte does not attack. If Byte performs a punch, Barq will throw one a second later as long as no other action is being performed. After this punch, the timer resumes its five second cycle. If Byte's ARMS are charged, Barq's ARM will also be charged, and he will punch at the same time. If the punch timer is not active while Byte is knocked down, Barq will immediately punch along with Byte after he gets up.[1]

The Dog and Cop Duo are challenging to push their max potential, but specialize in redirecting focus, and capitalizing. Barq by himself can provide slight support for with his punches, and can give an elevation advantage through Byte jumping on his head. He can also provide Byte with some mixups and extra pressure with his occasional punches.

However, he really shines by acting as a mobile, one-hit shield. If an opponent tries to take out Barq, Byte can capitalize on their lapse in concentration and punish, whether up close, or at range.

This duo works well with ARMS that can harass and interrupt the opponents movement at range, or provide lots of pressure up close. This complements both of their strengths in ranged play, and close pressure. Some examples include:

Byte & Barq appear as a Spirit that can be obtained by winning the Spirit Battle in Min Min's DLC Spirits board. They also cameo in Min Min's reveal trailer as well on an electronic billboard in the background of Spring Stadium. 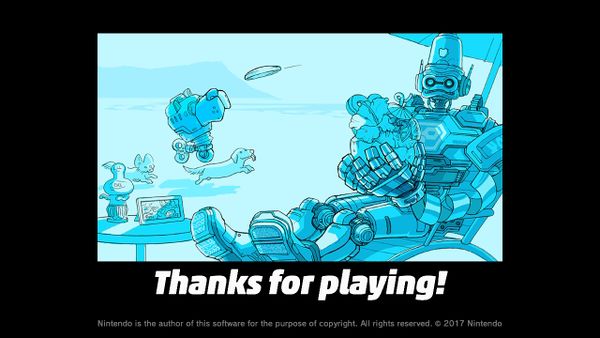