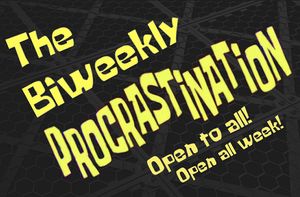 The logo for The Biweekly Procrastination.

The Biweekly Procrastination, formerly known as the Ohio ARMS Online Biweekly, is an online biweekly ARMS tournament series organized by Frosty and LOSER. The series began in August of 2017 and is still having new events today. Due to this, the Biweekly Procrastination is the longest continually running online ARMS tournament series. Upon its creation, former ARMS player Azilidaz supervised the events, but after becoming uninterested in the game, he gave full control to the duo who continue to run it to this day. The tournament series is also the primary result pool for the Ohio ARMS Power Ranking.

The Biweekly Procrastination typically runs double elimination brackets unless there are less than 8 entrants, in which a round robin tournament is held. On occasion an event holding 7 entrants may also be double elimination, depending on the rules at the time of the specific tournament. Players utilize Ohio ARMS' Discord server to communicate with their opponents as the brackets are ran on Challonge, a site that lacks player-to-player chat functions. In terms of the tournament's stage list, traditionally legal stages, including DNA Lab and Buster Beach among others, were chosen to be used. Today, the "Backroom" stage list is used alongside a modified version of the Backroom rule set.

Prior to its sixth installment, the Biweekly occurred on a single day of the week as nearly all other events do, but from the sixth event onwards a new format was used. This new format, dubbed the "all-week" format, allowed participants to play their sets reasonably throughout the week in which the tournament took place. The all-week format was primarily created to allow breathing room for players who have work or school and wouldn't be able to play numerous sets all in one specific day of the week.

Due to the fact that the events are ran from the Ohio ARMS Discord server as well as the event's title early on, many believed the tournament series to be locked to Ohio players only. This was never the case, in fact, the majority of the tournaments held were not region locked at all. Despite allowing European and Japanese players to enter, it was advised that all players be available at reasonable times in the EST time zone as to allow for ease on the Ohio players' part. In early 2020, the Biweekly Procrastination formally region locked to North America only as to comply with the North American Power Ranking rules. Despite this, Biweeklies occurring during the NA Power Ranking off-seasons will be open to all around the world.

From January 1st to April 1st, 2022, Dr. Coyle was banned from competitive use in any event eligible for the ARMS NA Power Ranking which included The Biweekly Procrastination. This was the first and only instance of a character being banned from the series outside of characters who were released as an event was taking place. Starting with The Biweekly Procrastination 100, stage striking rules in the series received an important new change: the lower-seeded player bans first as opposed to the higher-seeded player. 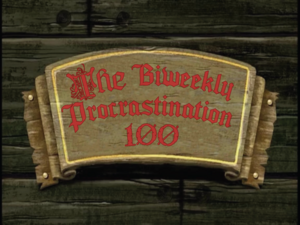 The logo created for The Biweekly Procrastination 100.