Champions of the Era 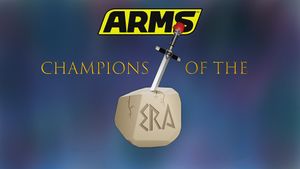 The logo for Champions of the Era.

Champions of the Era (abbreviated as CotE) was a weekly ARMS tournament series organized by Era. The series began in the Summer of 2018 and ran until its 100th event on October 10th, 2021 where Era also announced her retirement from ARMS tournament organizing.

Like most weekly events, Champions of the Era ran double elimination brackets, regardless of entrant count. Players utilized Era's Discord server to communicate with their opponents as the brackets were ran on Challonge, a site that lacks player-to-player chat functions. Many of the early CotE events were streamed and commentated by Cedge whereas later events were streamed by Era herself with various co-commentators over time. On occasion, there were pre-event warm up lobbies ran by Rashiko and LiteraryFirearms of Casual ARMS prior to the bracket beginning. After some tournaments, movie watch parties have also been held including one for Spider-Man: Into the Spider-Verse and another for Jurassic Park.

Unlike most other tournaments, CotE does not use the "Backroom" stage list. This means that players have the option to play on traditionally non-legal stages such as Spring Stadium, Ramen Bowl, Sky Arena, and/or Ribbon Ring (Ramen Bowl and Sky Arena are no longer included in the current stage list however).

The unique stage list for Champions of the Era has been considered a breath of fresh air by many, but some players also feel that a more traditional set of stages would be better for a competitive tournament. After many complaints about the stages, Era decided to create a new weekly tournament series, titled Temple Tantrum that utilized the "Backroom" stage list while still continuing to run CotE. 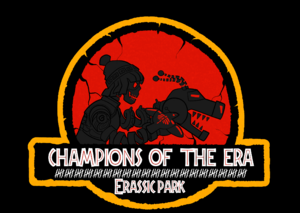 The unique logo used for Champions of the Era 100.