ARMS US & Canada Online Open was an online major official ARMS tournament held on March 31th, 2018 by Nintendo of America. Eight players qualified via Ranked Matches during March 8th-18th alongside four players who would serve as alternates if any of the eight could not participate. The tournament ended with Resolve winning a close game 5 last round set against Gryffical after a draw in round 3. All finalists received a special piece of artwork signed by Kosuke Yabuki, Masaaki Ishikawa and Kenta Sato while Resolve also received a second piece of artwork signed by even more of the dev team.

Unlike most tournaments, Nintendo used a single-elimination bracket for the finals with all stages (except (NAME REDACTED), Ninja College, Cinema Deux and Snake Park) on random. All round 1 sets were best of 3 while the rest of the tournament were best of 5. 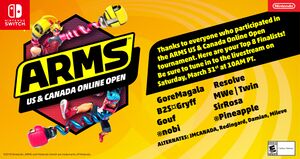 A graphic highlighting the Top 8 qualifying players and 4 alternates.