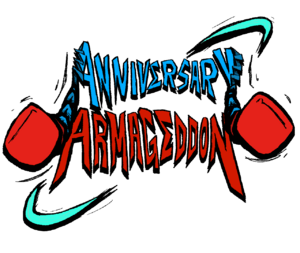 The logo for Anniversary Armageddon.

Anniversary Armageddon was a 4 day online ARMS event held from June 16th to June 19th, 2022 in celebration of the 5th anniversary of ARMS. The event as a whole was primarily organized by Dendy with further assistance from Mileve, Frosty, LOSER, Kholdstare, and Era. Each day of Anniversary Armageddon had a unique tournament including The Appetizer, Default Derby Deluxe, Customs Clash Championship, and Legends VS. A New Generation.

The event was initially teased on May 25th[1] with an official announcement following on May 29th, 2022[2]. The Twitter hashtag "#ARM5" was first used in these posts as a nod to it being a 5th anniversary celebration.

The Appetizer was held on June 16th, 2022 and featured 8 community selected grudge matches whose winners led into a double elimination bracket. A post announcing this event and asking the community for grudge match submissions was posted on June 2nd, 2022[3]. After a little more than a week, deliberation occurred for which sets would be chosen. Matches were picked based on popular vote, relevancy, and willingness of participants. A finalized list of grudge matches was posted on June 14th, 2022[4]. The Appetizer was streamed by HanukkahJamboree and Nama.

Customs Clash Championship was held on June 18th, 2022 and featured the standard competitive Backroom ruleset. The event was initially announced on June 8th as the main event of Anniversary Armageddon and was open to all regions around the world.[6] The event was streamed by Mathias Wolfbrok and Layla with set communications taking place in the ARMS Central Discord server.

Legends VS. A New Generation

Legends VS. A New Generation was held on June 19th, 2022 and was the finale to Anniversary Armageddon. Two crews were chosen, by the team who organized the event as a whole, to represent the legacy player base and the current day player base respectively. The crew battle was first announced on June 12th[7] with the final roster of players being shown off on June 18th.[8] Hamma and Serp streamed and casted the event. 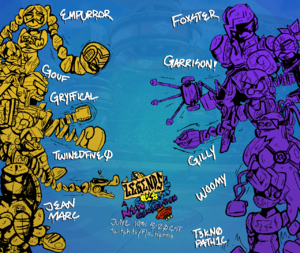 A promotional image, created by Dendy, showing off the Legends VS. A New Generation roster.