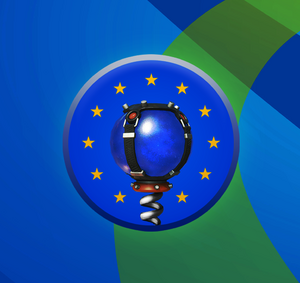 European ARMS' logo which is commonly associated with the EUAC event series.

Like most events, EU ARMS Challenge runs double elimination brackets. Players utilize the EU ARMS Discord server to communicate with their opponents as the brackets (aside from the first event) are ran on Challonge, a site that lacks player-to-player chat functions. The tournament is streamed through EU ARMS' Twitch account and has featured many different casters over time including Defur, Layla, Mathias Wolfbrok, and more. In terms of the tournament's stage list, the "Backroom" stages were initially used, though starting with EUAC #64 Ninja College replaced Scrapyard as a counterpick stage. Generally, the event utilizes a modified Backroom ruleset.

EU ARMS Challenge events have always counted toward the EU ARMS Power Ranking since said ranking's inception. At the end of power ranking seasons, invitational events with prize pools have traditionally been held, though prior to these occurring specific EUAC events featured prize pools instead. These events are EUAC #19 and #25, both of which had a $100 pot.