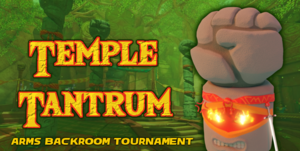 The logo for Temple Tantrum.

Temple Tantrum was an online biweekly ARMS tournament series organized and created by Era. The series began in August of 2019 and ran events until late May 2021 when Era began running Central Smackdown again in its place.[1]

Similar to most weekly/biweekly events, Temple Tantrum ran double elimination brackets, regardless of entrant count. Players utilized Era's Discord server to communicate with their opponents as the brackets were ran on Challonge, a site that lacks player-to-player chat functions.

Temple Tantrum utilized the "Backroom" stage list which consists of the stages that are traditionally considered legal for competitive play. These stages include Sparring Ring, Mausoleum, DNA Lab, Buster Beach, Temple Grounds, Scrapyard, and Via Dolce. The series was made to specifically use this stage list due to complaints of the stage list in one of Era's other tournament series, Champions of the Era.