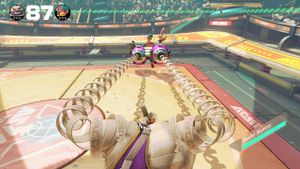 at the same time when using traditional controls). While they do more damage than ordinary attacks, they also leave their user more vulnerable.

When a fighter grabs, both of their ARMS are locked together by a wide, green, decorative beam, which heads towards the targeted opponent. If this beam connects with their target, they will be brought together—note that if the grab connected while the grab user was on the ground, they will pull their target towards them, and if it connected while they were in the air, they will pull themselves towards their target. After connecting, the grab user will throw their opponent, dealing 150 to 200 damage, depending on the fighter used. After being thrown, a fighter will recover, similar to being knocked down by an ordinary punch. Grabs are significantly more powerful than standard attacks—in fact, the most powerful charged ARM in the game, the Kablammer, is equal in damage to the weakest throws—but they also leave a fighter open to attack, as both their ARMS are used.

Grabs cannot be blocked by shielding, but they can be deflected if their target hits of the grab with one of their ARMS. In a battle with more than two fighters, a fighter can also interrupt a throw by attacking the person who is grabbing; however, some fighters leap into the air as part of their throwing animation, such as Mechanica, Kid Cobra and Ninjara, which can make them harder to interrupt.

Certain ARMS that are upgraded to the (+) status will give an additional 5 damage to the user's grab if equipped. This is by a per ARM basis, meaning if the user has two of these ARMS equipped, they will gain 10 damage to their grab. The ARMS that give this bonus are Megaton, Megawatt, Whammer, Kablammer, Guardian, and Clapback.

The appearance of the beam depends on a fighter, similar to their ARMS, symbols of their attire and fans, which are styled after object of their overall appearance or association. The beam appearances are as follows below: