From ARMS Institute, the ARMS Wiki
(Redirected from Get Arms)
Jump to navigation Jump to search

This page is in need of more images. Please help ARMS Institute by uploading more.

ARM Getter is a single player mode and stage used to acquire and upgrade ARMS. 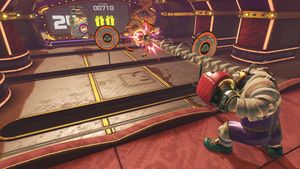 ARM Getter can be selected by choosing "Get ARMS" on the main menu. It requires

to play, which are earned by playing other game modes and collecting badges. The more

the player spends, the longer they will be able to play.

The mode operates similarly to Skillshot, with targets appearing in random positions for the player to destroy. However, whenever a new wave of targets appears, there is also a chance that an Item Drone carrying a box will appear behind the third row of targets, flying from one side of the range to the other. Hitting this drone will cause it to drop the box, awarding the player with one randomly selected ARM for the fighter whose emblem is shown in the lower-right corner of the box. Note that the first box that appears will always contain an ARM for the fighter the player is currently using, unless all ARMS have already been unlocked for that fighter. Clocks may also appear on a rarer basis, and, when hit, they will add an additional 5 seconds to the timer (10 seconds when playing with a long timer).

Getting a higher score by smashing more targets will increase the chances of boxes appearing.[1] As a result, players are encouraged to curve their ARMS well to obtain the largest combo of targets possible.

When the game ends, the player is shown all the ARMS they unlocked and offered the opportunity to change which ARMS are assigned to each Fighter, similar to the Set ARMS mode. All ARMS could be obtained twice for each character, the first time will grant the specific character access to the ARM, the second time obtaining an ARM will turn it into a "Plus ARM" (Indicated by a blue + sign beside its name), an upgraded version that does 10 more damage than its standard counterpart, as well as another bonus depending on its weight class. Once a player has earned the plus variant of a certain ARM, that ARM will no longer appear in the ARM Getter.

Once the player has unlocked every ARM (along with their Plus variants) for each of the fighters, ARM Getter will remain available to play, though Item Drones carrying boxes will no longer appear.

As of Version 5.2.0 introducing the game's final character, Dr. Coyle, there are exactly 1,134 ARMS to be obtained from ARM Getter.